Wick HeavyTop mouthpieces are designed to reduce the amount of vibration lost through the mouthpiece. Additional mass in key areas transfers the energy much more efficiently, resulting in improved projection and stability. 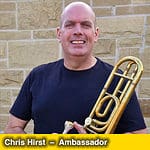 Chris studied music at Salford and Birmingham Universities from 1984 to 1988. As an undergraduate he specialised in trombone and conducting, working with many internationally renowned musicians including Ian Bousfield and Roy Newsome. Chris won the Harry Mortimer Award in 1987 being the outstanding instrumentalist of the year and as a post-graduate studied music in education, specialising in instrumental teaching.

Chris has been principal trombonist with several of Yorkshire’s finest brass bands including Grimethorpe Colliery,