The tenor horn is a saxhorn found in British-style brass bands and in terms of size and pitch comes between the flugelhorn and baritone. It is known as the alto horn in the USA (or more colloquially, the ‘peck horn’, because its role was often playing off-beats), the Althorn in German-speaking countries and the saxhorn alto in France.

The tenor horn was often called the Cinderella of the brass band, as it lacked the power of the massed ranks of cornets or the sheer might of a trombone section. Denis Wick mouthpieces go a long way to correcting this misapprehension, helping the tenor horn make a powerful sound with huge expressive power and a romantic tone. The sound of Denis Wick mouthpieces creates a rich, harmonious blend in a band.

The shank is designed to fit British-style tenor horns, not the German-style rotary-valve oval models. 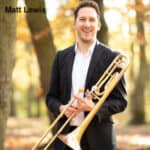