The US trombonist bringing jazz and funk to China

Terence Hsieh is a trombonist, pianist, educator, composer, arranger and bandleader from Durham, NC living and working in Beijing, China since 2012.Terrence graduated from Oberlin College and Conservatory with a BA in Chinese and a BM in Jazz performance, where he primarily studied with trombone legend Robin Eubanks, but also under the tutelage of pioneers Billy Hart, Sean Jones, Marcus Belgrave and Gary Bartz. 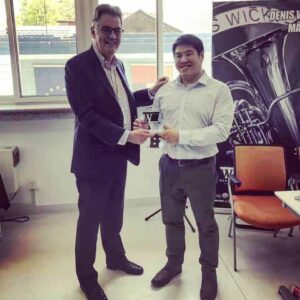 ​Hsieh is a leading force in Jazz education in Beijing: he serves as the Director of Jazz at the International School of Beijing (ISB), where he teaches the fundamentals of jazz performance. Hsieh is also a dedicated lecturer, having given talks on understanding Jazz music to the Beijing community in both Chinese and English.

He is a sought-after studio musician and arranger, having composed and played in the backing bands on some of China’s most famous musical television shows, including I Am A Singer (我是歌手), The Mask (蒙面唱将猜猜猜) and Rising Star (中国正在听) as well as arranging, recording for and performing with such notable artists as Kubert Leung 梁翘伯, Tia Ray 袁娅维, Sandy Lam 林忆莲, Terry Lin林志炫, Tan Weiwei 谭维维, A Xin 阿信 and Ayunga 阿云嘎.