Sousaphone and tuba player of note!

Matthew Cotterhill is a sousaphone and tuba player living in Leeds. He was born in Rotherham but spent most of his young life in Doncaster before moving to Sheffield. While in Sheffield he was a founding member of Renegade Brass Band which combines a big brass sound with raw hip-hop vocals and beats, and in a short period of time has built a reputation as a headline act. RBB have played packed-out shows at venues around the UK and Europe, and their unique sound and energy has seen them support acts such De La Soul, Busta Rhymes, Grandmaster Flash, Public Enemy, The Cat Empire, Jamie Cullum, Quantic, Craig Charles and many more.

A hit with festival crowds across the world, the band have played at festivals including Glastonbury, Java Jazz Festival Jakarta, Dubai Jazz Festival, Sea Sessions Ireland, Stuttgart Jazz Festival and Soundwave Croatia. Their latest EP, ‘Bottle This Fire’, sees the band team up with Grammy-nominated producers Andy Thompson and Lazerbeak, who’ve worked with Taylor Swift, The Hamilton Mixtape and Doomtree.

In 2018, RBB released ‘The Abbey Road Sessions’, a live recording taken at the legendary studio. Over the last decade, the band have also released two studio albums, and a remixes album featuring artists such as Hugo Kant, Sam Redmore and Tall Black Guy.

Matthew moved to Leeds and joined another start-up group called Back Chat Brass in 2016.

Back Chat Brass have been wreaking havoc in venues around the world, coaxing even the stubbornest of dance-phobics from their seats with our signature take on your go-to hits. Rooted in pop, funk and hip hop, our brassy beats give soul to any party and lift the roof at any gig. Also giving educational workshops into Schools, SEND schools, care homes, and community groups. Matthew has had the joy of working with Live Music Now, Pbone (Warwick Music) and the in2 project. With these groups, he takes part in studio recordings, video clips, and national and international concerts in halls, auditoriums, festivals, and streets of different towns and cities. He has also played Bb & Eb Tubas in traditional UK Brass Bands (such as Carlton Main Frickley Colliery, Thorsby Colliery, Unite the Union Brass Band and Stannington Brass Band).

He plays on a Yamaha YSH-301 Series Fiberglass BBb Sousaphone. 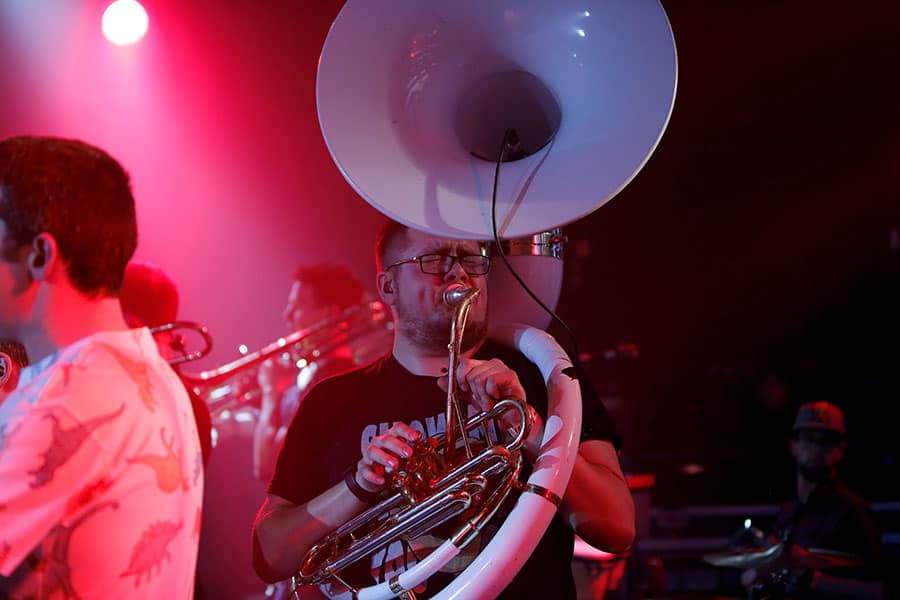