A passionate and creative performer, Kate Amrine is a prominent trumpet player balancing a multifaceted career from developing new repertoire and curating concerts to freelancing with many different groups in the New York City area. Kate frequently alternates between the musical theater world and the contemporary classical/new music worlds. Some favorite recent experiences include being the lead trumpet player in all-womxn funk band TOP Queens and performing with groups including the Rodney Marsalis Philadelphia Big Brass, Kings County Brass, and Spark Duo.

In addition to subbing on Broadway and performing in various regional productions, Kate has held the trumpet/piccolo/flugel chair on two Off-Broadway shows – Alice by Heart and Whisper House. Kate also performed on the She is Risen album with an all-female orchestra and several Tony award nominees including Cynthia Erivo, Shoshana Bean and Ledisi. Kate was in the pit orchestra for Ragtime on Ellis Island and The Crossing opera at Brooklyn Academy of Music. In 2015, Kate joined the Broadway: The Big Band Years tour for two sections and played second trumpet in the National Tour of Annie. Kate has also been fortunate to play in a rock band with Norah Jones and lead trumpet in a full orchestra with Evanescence. Kate also appeared on Late Night with Jimmy Fallon as part of a female horn section with the band Sleigh Bells.

Kate is very dedicated to commissioning and performing new music, premiering over 30 pieces both as a soloist and a chamber musician. Kate’s second album This is My Letter to the World was released in early 2020 on the Innova record label. Her album features new music for trumpet inspired by politics and social concepts and addresses issues including gun violence, identity and the experience of being a woman, meditation, and immigration. Several of the pieces have an accompanying video element as well. Her duo Spark Duo with partner Ford Fourqurean is passionate about commissioning new works and recently completed a spring tour performing and presenting at several universities on the west coast. Kate’s debut album As I Am was self-released on November 7th, 2017 – featuring new music by women composers. Through this project, she was invited to present recitals at various festivals and events including the International Women’s Brass Conference (in 2019 and 2017) and the Women Composer’s Festival of Hartford (in Connecticut). As a classical soloist, Kate has performed Vivaldi’s Double Trumpet Concerto, Torelli’s piccolo Concerto, Leroy Anderson’s The Trumpeter’s Lullaby, and Persichetti’s The Hollow Men in New York City, her hometown Bethesda, Maryland, and in multiple cities on tour in Japan. Kate has also performed offstage solos at both Carnegie Hall and Alice Tully Hall. In addition to advocating for underrepresented composers, Kate is very passionate about expanding awareness and representation for female brass players. She is half of the team behind Brass Chicks (a blog dedicated to celebrating the work of female brass players with guest posts and interviews) and recently started a Facebook group to support female, trans, and non-binary brass players. Kate Amrine also recently joined Rebecca Karu and Melissa Muñoz in starting Brass Out Loud – a new virtual workshop for all brass players with inclusive and diverse faculty. Please register for our workshop at www.brassoutloud.com and support via our kickstarter if you are able.

Kate has experience hiring musicians for everything from a full orchestra to a big band to a horn section for various events. She contracted a full orchestra for a recording session of Netanel Hershtik’s album The Art of Cantor at Avatar Studios. She also has hired musicians for over 10 different musicals, rock groups, and various church events since coming to NYC in 2010.

In addition to performing, Kate enjoys teaching all ages and experience levels for the past ten years. She is currently an Adjunct Instructor at New York University, where she has been teaching private lessons to undergraduates since 2013. In addition to managing her own private studio of 10 students, Kate also has experience teaching for several years at various El Sistema inspired programs including the Harmony Program, Baltimore Symphony’s Orch Kids, and with the Brooklyn Conservatory of Music. Several of her students are currently first chair in school ensembles, have been nominated for honor bands. Many of her students have also been accepted to groups including the Lincoln Center Middle School Jazz Academy, Jazz Standard Youth Orchestra, and the NYC All City Latin Ensemble.

Kate received a Bachelor’s degree in Trumpet Performance from New York University and a Master’s degree from Peabody Conservatory. She is currently pursuing her Doctorate at Stony Brook University studying with Kevin Cobb. 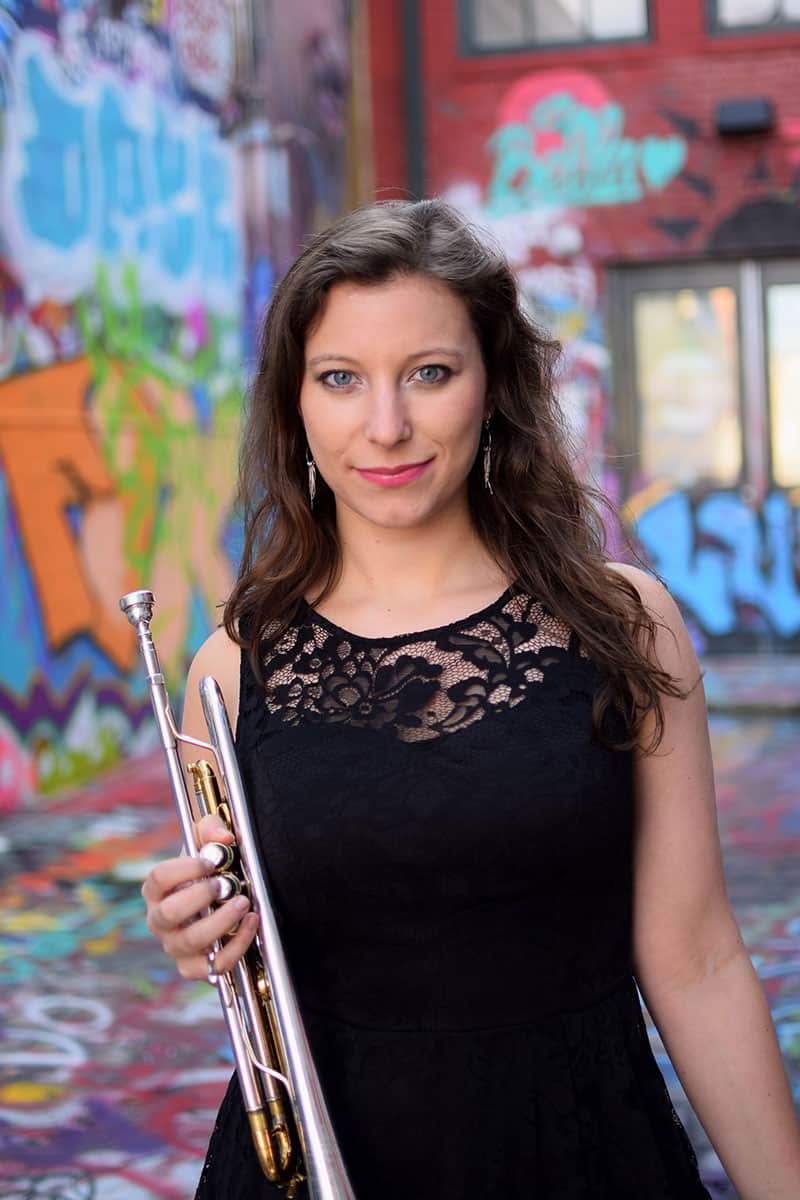